So my husband volunteers at the Seattle Aquarium. They’ve had two octopuses there for a while, in adjacent tanks. The tanks are connected by a tube about eighteen inches or so across, but since octopuses can be territorial, a screen is in place so the animals are aware of each other, but can’t, say, try to kill or eat one another. Which they will sometimes do if they have the opportunity.

One of the octopuses recently started displaying reproductive behavior, pulling eggs out of her mantle and braiding them together. There are no male octopuses in the vicinity, so the eggs aren’t fertile, but policy is that when an octopus looks like she wants to breed, she’s released out into the sound. So Octopus Number One has moved on.

The screen between the two tanks was removed, and Octopus Number Two now has access to both tanks.

According to my husband, Number Two was positively gleeful today. She was much more active than she’s usually been, exploring, spreading her legs out, jetting a time or two, spending some time up at the glass looking at people — while he described it I could picture in my mind a cartoon octopus dancing around the newly-huge space and cackling, “Mine, all mine!” with a huge, cartoony grin. 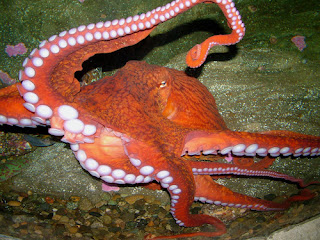 Aquarium visitors spent a lot of time around the octopus tanks today, for obvious reasons. One pair got a surprise when they turned away for a few moments, then turned back to find that the octopus was Right There In Front Of Their Faces, legs fanned out. The animal’s web (the skin between its legs, like the webbing between your thumb and forefinger) is about six feet across, then add several more feet on either side for the legs themselves. That’s a lot of octopus underside to suddenly find spread out a few inches away from your head, and there were a couple of squeaks and jumps right before the cameras came up and started clicking. I’ll bet those pictures are great. 🙂

I assume the aquarium will acquire another octopus eventually, but until then Number Two will doubtless revel in her newly expanded territory. Sounds like she’s having fun with it.