I got my cover for the third Sentinel novel, Captive Magic, and permission to show it off. 🙂 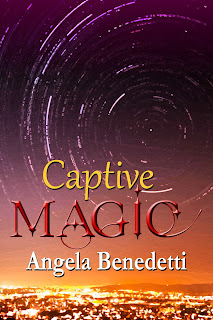 The book is due out on 4 September, and I’m excited to see what people think of it.

Teleporter Breck Bayes made a deal with a demon to save the life of his little sister Amanda, who was dying of cancer. The demon expects Breck to work off the debt — as a thief who can get past any walls or locks. If Breck balks, Amanda’s cancer will come back, and she’ll die. Breck’s a good guy, but a few trinkets versus Amanda’s life? It’s no contest.

Manny hears about Breck’s popping around town and uses his own talents to find and confront him. Sentinels are supposed to prevent the magegifted from using their talents to steal, by force if necessary, but then he gets the whole story. Manny understands family, and he decides that his Sentinel persona is going to have to suck it up and deal while he helps Breck get out from under the demon — even if it means becoming an accomplice to the thieving while they plot Breck’s escape. But then the demon notices Manny, whose truesight and seeking would be very useful in its quest to own things that don’t properly belong to it, and suddenly it’s not only Breck who’s in trouble.

There’s an entry for it on Goodreads, for folks who use that site.

Just under three weeks to go!